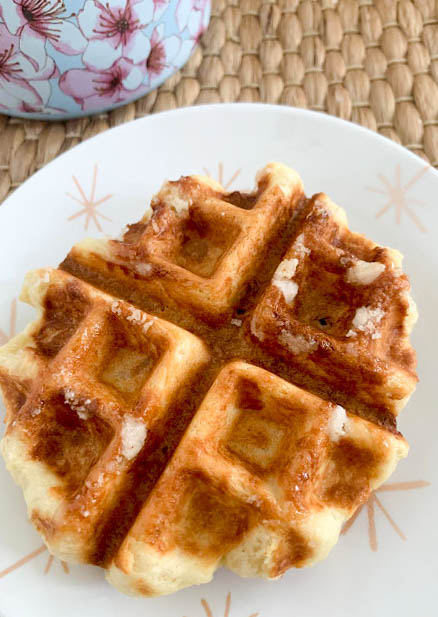 Warm the milk in a small pot (don't let it boil or become too hot, just take the chill off). Pour into the bowl of a stand mixer. Sprinkle with yeast. Start the machine running slowly with the dough hook attachment. Slowly stream in the flour, sugar, salt, and eggs. Mix for about 5 minutes.

Add the butter, about 1/2 tablespoon at a time while the machine is running over the course of about 10 minutes until the butter is well-incorporated and a ball forms.

Gather the dough into a ball in the middle and cover with a tea towel for 1 hour 45 or until the dough doubles in bulk. Fold in the sugar with a spatula or giant spoon. 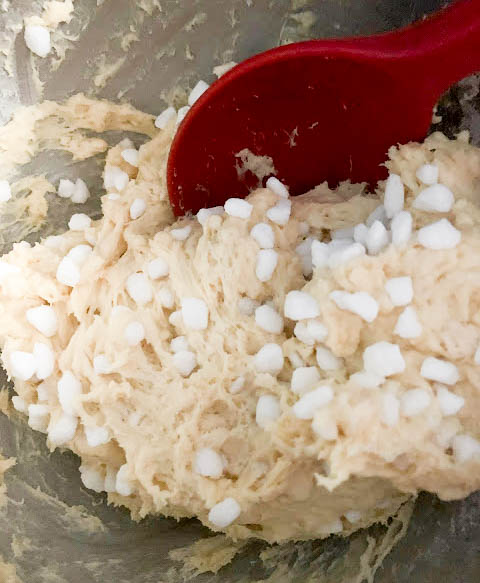 Divide into 10-12 even portions on a parchment-lined baking sheet and allow to rise about 45 minutes-1 hour. I ended up with 11 but they weren't exactly even. If I was a different person I would have weighed them and make them exactly even but one slightly big waffle is fine with me.

Preheat oven to 200. Place a ball in the middle of a hot, deep-welled "Belgian" style waffle pan and cook about 5 minutes or until golden brown. 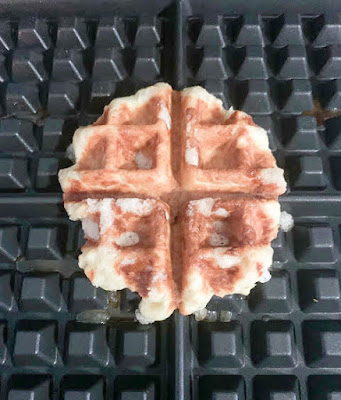 Take great care removing the waffles from the pan, there is a lot of molten sugar! If you have a waffle fork, now is the time to break it out. I used a long pair of bamboo tongs. Place the waffle in the oven on a baking sheet to keep warm. Or eat them as they come out of the waffle iron. I don't judge.


Repeat for remaining waffles. Store leftovers at room temperature in an air-tight container. Reheat at 200 for about 5 minutes or until soft.

When we were in Belgium almost 10 years ago (oy!) we, of course, tried  Liège waffles. These are the waffles that are sold at little stands on the street, not the "Belgian" waffles we have here in the US. They don't have toppings--the better to showcase the caramelized sugar chunks--but come in plain (like these), vanilla and cinnamon flavored.

They were also sold as a snack, not breakfast. They are pretty rich, it's basically brioche in waffle form with added sugar but so tasty! They are named after the town they are from,  Liège, in the French-speaking Wallonia region of eastern Belgium. They really were ubiquitous in Brussels when we visited, almost as much so as frites shops, and I am sure it is the same today.

When I was reading recipes in French when researching this recipe, I found a lot of references to it not being a "fair waffle" (Gaufres de foire) which, after doing some sleuthing, seems to be a flatter, rectangular waffle (similar?? the same as the Brussels waffle--gaufre de Bruxelles?? which is a whole other conversation) than the Liège waffle. This must be a very important distinction because nearly every French-language blog I read mentioned this very emphatically while no English language site did. There must be more confusion over what kind of waffle it is in France and Belgium. Here is it pretty clear. Liège waffles are the ones with the sugar and what we call Belgian waffles aren't really Belgian at all and are thick and fluffy.

When developing the recipe, I also noticed that the French language sites for the most part only had you do two rises, one short, one long and no overnight or refrigeration step. Nearly all of the popular American recipes had you refrigerating the dough (sometimes for over 24 hrs! Some for 24 hrs more than once!)  and then letting it come to room temperature. I decided to error on the side of the Belgians here and assume they are correct. I feel like they'd know better and I have a sneaky suspicion that the Americans are trying to time the recipe so they could serve these for breakfast with minimum early morning effort.

I do not suggest having these for breakfast, they are snack waffles! Think of them like you would an ice cream cone on a hot afternoon. Personally, I started them after an early lunch.


If you can, use actual Belgian pearl sugar in this. Ikea often has Swedish pearl sugar so that is easier to source but Belgian pearl sugar is bigger and craggier. I purchased mine from Waffle Pantry which has the added bonus of having yeast in stock, which I know is a hot commodity in these pandemic times. It was here in about 3 days!


These are insanely good and I was very proud of my little waffles! I've literally wanted to make them since we came back but they seemed like a lot of work. As it turns out, they were actually pretty easy and since we can't leave the house, this was the perfect time to make them. The dough just tastes so good! I was a little worried because I don't make a ton of things with yeast and never make anything like broiche but these were absolutely perfect and way easier than I feared. I feel like I wasted a lot of years not making these waffles!

All recipes, text, and photographs on Coconut & Lime are the original creations and property of Rachel Rappaport (coconutlimeblog@gmail.com) and are for personal, non-profit use only. Do not post or publish anything from this site without written permission from the author. If you see this message and recipe on any site other than http://www.coconutandlime.com the work is being used illegally. Please contact Rachel Rappaport at coconutlimeblog@gmail.com so action can be taken.

How To Keep RV Drawers Closed While Driving
January 18, 2023