This orange-scented dough, baked in the form of a crown, and topped with dried and candied fruits makes the traditional vegan Rosca de Reyes ( King Cake).

Rosca de Reyes is a key part of thefeast of the Epiphany, Three Kings Day orDia de Reyes in Mexico. This is also the day, that children receive gifts from theReyesMagos(Magi) instead of Santa. Traditionally, the night before, the children leave a note for the Magi in their shoes, and place them under the Christmas tree or outside. The Magi respond by bringing them gifts the following morning, just as they brought gifts to the Christ child.

Theroscais usually served with hot chocolate and eaten at any time of the day or all day. The fruit on the rosca is meant to represent the crowns jewels, and inside the bread is a hidden small figurine of baby Jesus. The lucky person to find baby Jesus in their piece of bread is designated to bring tamales on Feb. 2nd to the Feast of the Candelaria.

Living on the border, our traditions are a mixture of Mexican and American customs. This being said, as a child Santa brought most of our gifts on Christmas, and theReyes Magosfilled our stockings with treats and small toys on Jan 6th. We continue this tradition with our children, but for them, the Three Kings bring them books!

Not many people know this, but one of the candied fruits used to top theroscais calledacitrn.Acitrnis made from a species of cactus, also know as biznaga, only found in Mexico.

The candy is made by extracting the pulp from the cacti, cutting it into blocks, and cooking it in a simple syrup. The result is an opaque sugary block, firm to the touch, but soft and juicy on the inside. It iscommerciallysold in red and green tinted blocks or cut into strips.

It is actually very hard to find because the cactus is at risk of becoming an endangered species. Most people nowadays use a quince paste or other fruit paste called ate in its place, but you can use whatever dried or candied fruit you prefer. 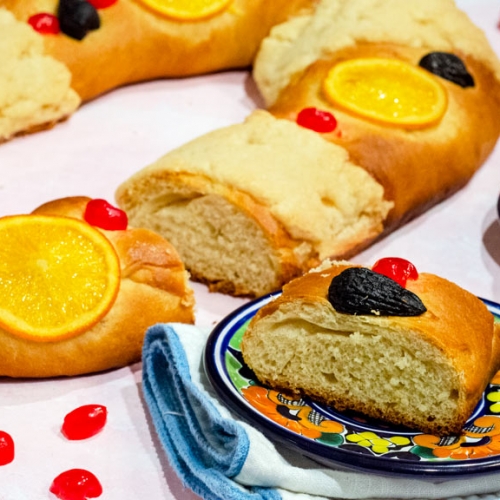 To make the sugar paste:

To Make the non-egg wash: