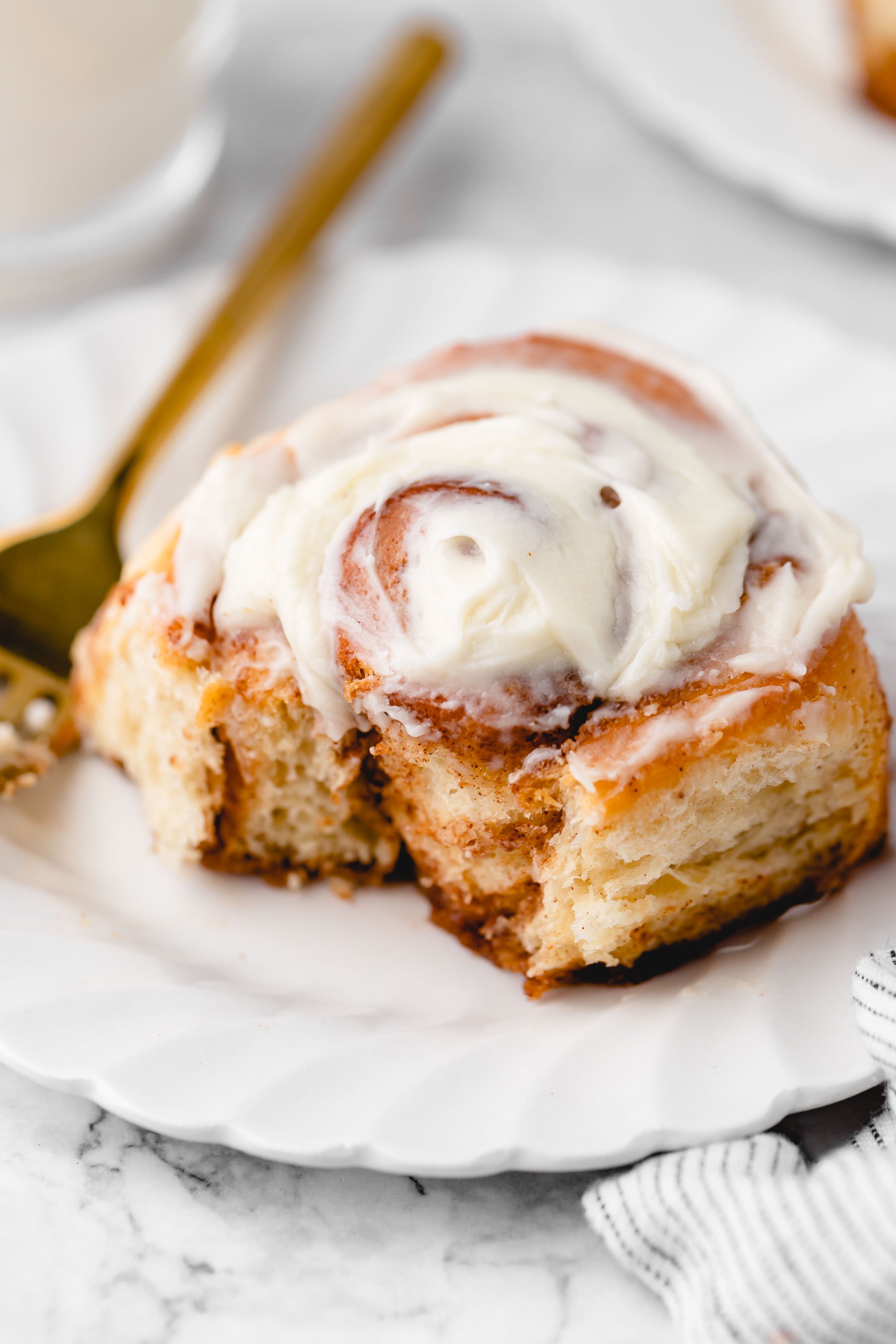 These Vegan Cinnamon Rolls pair a sweet, ethereal dough with swirls of buttery, brown sugar and cinnamon filling for a breakfast worthy of a special occasion. The tangy vegan cream cheese icing is the perfect finishing touch!

Unless you’re making the cinnamon rolls that come in a refrigerated tube, you’re working with yeast dough, which requires some time, patience, and finessing. Your efforts will be rewarded, though, as your whole kitchen is filled with the smell of cinnamon and sweet dough baking in the oven—and when you take that first bite once your cinnamon rolls are done. Based on my vegan dinner rolls, you are in for such a treat with this recipe. It took me months to perfect this but I am finally SO excited to be sharing this recipe with you!

While the cinnamon filling and cream cheese frosting get all the attention when it comes to cinnamon rolls, you can’t underestimate the importance of good dough, and I’ve got an awesome recipe for that. It’s inspired by Japanese milk bread, so it’s sweet, cloud-like, and it even lasts longer than a typical bread (or cinnamon roll) thanks to a tangzhong starter.

Tangzhong is a technique used for making yeast bread that involves cooking some of the flour in liquid to pre-gelatinize the starches.

While this sounds very technical, what it means for you is that the flour is better able to retain liquid, resulting in a soft, moist, cloud-like bread (or cinnamon roll) that can be stored longer than a traditional bread.

Many Chinese, Taiwanese, and Korean breads are made with tangzhong, but the most popular bread using tangzhong is Japanese milk bread (recipe coming soon!), also known as Hokkaido milk bread.

Please note that this is important information on the ingredients and instructions and the FULL recipe with amounts and details can be found DOWN BELOW (scroll to it) in the recipe card.

For the vegan cinnamon rolls:

Which Type of Cinnamon Is Best?

Saigon cinnamon is considered the most flavourful and aromatic cassia variety, so it’s the best for making cinnamon rolls, but the more widely-available Indonesian cinnamon and the rarer Ceylon variety are also excellent choices. (Chinese cinnamon is primarily used for medicinal purposes.)

How to Make Vegan Cinnamon Rolls

Make sure you have a good block of time set aside to make this recipe. It’s not hard, but there are a lot of steps involved!

Cook the mixture. In a small pan set over medium-high heat, whisk together the bread flour, soy milk, and water. Continue to stir until the mixture thickens; it will be quite thick, almost like a pudding or a slurry.

Chill. Pour the tangzhong into a small bowl and allow it to chill for about 10 minutes in the fridge.

Combine the dry ingredients. In the bowl of a stand mixer, whisk the bread flour, sugar, instant yeast, sea salt, and cinnamon.

Add the remaining dough ingredients. Create a well in the centre of the flour. Slowly pour in the warm milk, vegan butter, and Tangzhong mixture. Stir until just incorporated, forming a shaggy dough.

Rest. Cover the bowl with a kitchen towel and let it sit for about 10 minutes.

Knead. Use your dough hook to knead the dough for 15 minutes on medium speed (speed 4 for a KitchenAid stand mixer), stopping to scrape down the sides as needed. The dough might be sticky at first, but you can add up to 2 additional tablespoons of flour; you want the dough to be smooth, with slight dimples with a bit of tension formed. Stretch the dough up and onto itself and pull or roll it into a smooth ball.

Let the dough rise. Lightly grease the bowl with oil and place the dough ball back into it. Cover the bowl with a kitchen towel and let it sit for at least 1 hour, or up to 90 minutes, on the counter in a warm area or overnight for about 8-12 hours in the fridge. The dough should double in size.

Roll out the dough. Gently punch down the dough, then pull the sides in on each other and fold it a few times. Turn the dough out onto a floured surface and use a rolling pin to roll the dough into a 12 x 12 inch square.

Form the dough into a log. Spread the filling over the top of the dough, to the edges. Pat it to help it stick. Working from the right side to the left, roll the dough tightly over and onto itself, forming a log. Use a large spatula and lift the dough onto a baking sheet and place it in the freezer for 10 minutes.

Cut the rolls. Use unflavoured dental floss or a sharp serrated knife to cut the dough into 9 equal pieces.

Let the rolls rise. Place the cut cinnamon rolls into a greased 9-inch square or round pan, spacing them evenly so they have room to expand. Cover and let rise for about 45 minutes; start preheating your oven to 350ºF during the last 15 minutes of the rising time.

Bake. Bake the rolls for 25 minutes in the centre of the oven. Cool for 10 minutes before adding the frosting.

Add the remaining ingredients. Beat in the vanilla, salt, and a cup of powdered sugar and the cornstarch. Mix for about 2 minutes, or until incorporated.

Chill. Refrigerate the frosting for at least 4 hours, or overnight, if you have the time. Otherwise, spread the frosting onto the cinnamon rolls and serve.

What Is a Good Substitute for Cream Cheese Icing?

If you can’t find vegan cream cheese locally or you’re just not a fan of cream cheese icing, you can use a vegan vanilla buttercream or make a simple glaze by combining powdered sugar with a splash of plant milk; stir and keep adding milk a teaspoon at a time until the mixture reaches your desired consistency.

Here are a few hints and tips to make these vegan cinnamon rolls a little bit easier.

With the cream cheese frosting on these cinnamon rolls, you’ll need to keep them in the refrigerator. They’ll last for up to a week in the fridge; let them come to room temperature before you eat them, or warm them up in the microwave for a few seconds—just enough to heat them slightly without completely melting the frosting.

Can I Freeze This Recipe?

You can freeze vegan cinnamon rolls for up to 3 months. Either freeze them without the icing or place them on a parchment-lined baking sheet, freeze them uncovered until the icing is frozen solid, and then wrap them in plastic wrap. Let the cinnamon rolls thaw in the refrigerator before serving.

Enjoy friends! If you make this vegan cinnamon roll recipe, please snap a photo and tag #jessicainthekitchen on Instagram! We’d also love it if you would leave a comment below, and give the recipe a rating! Thanks so much! 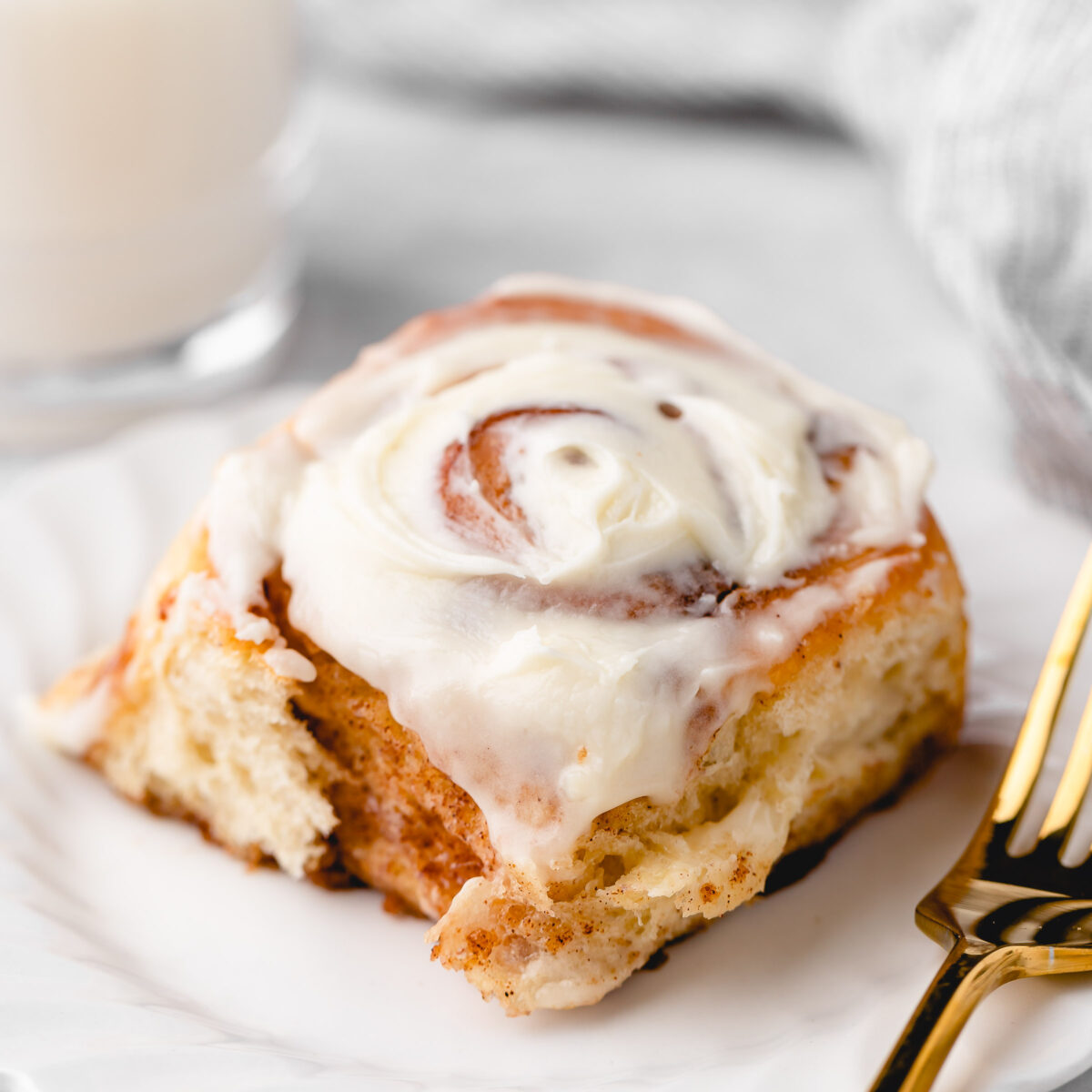 Thank you to Beth, an incredible reader who commented on my vegan dinner rolls and let me know she made cinnamon rolls with them! Wowed and in awe, my experiments to make vegan cinnamon rolls from a previous recipe of mine began!    How to store: These cinnamon rolls will last for up to a week in the fridge; let them come to room temperature before you eat them, or warm them up in the microwave for a few seconds—just enough to heat them slightly without completely melting the frosting. How to freeze: You can freeze vegan cinnamon rolls for up to 3 months. Either freeze them without the icing or place them on a parchment-lined baking sheet, freeze them uncovered until the icing is frozen sold, and then wrap them in plastic wrap. Let the cinnamon rolls thaw in the refrigerator before serving.

The post Vegan Cinnamon Rolls appeared first on Jessica in the Kitchen.