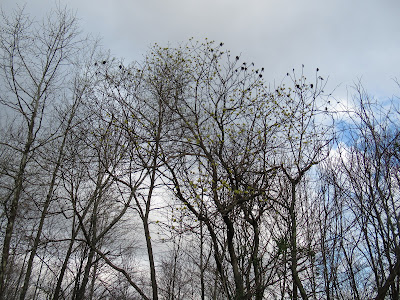 Wednesday was a day of brooding contrasts--a morning with mere slices of blue sky appearing through grey overcast, bursts of rain, hints of sun, more clouds, uneasy weather.
The local forecast warned of heavy winds, rain overnight.
Late afternoon cleared enough for me to do some pruning and tidying in both wall gardens. Three lavender plants had succumbed to winter damp and needed removal;  several that remained in pots over the winter are alive and showing fresh growth, but need trimming.
As dusk approached the air developed a heavy brooding quality.
Dawn was concerned about getting to work in the morning if the creek in front of their house should go over the bridge, so arrived just before dark to stay in the downstairs guest suite.
She had been here only a few moments when the wind picked up.
To say that the wind 'roared' is to use a cliche', but the sound of the approaching gale had a deafening growl as it swept in from the south west bringing rain driven almost horizontal by its force.
Jim herded us downstairs at which point I remembered that Shelby-Cat [who else!] had slipped out the back door when I came in from gardening.
I stepped out to the porch where I was instantly pummeled with rain.
I called Shelby, wondering if she could hear me over the howl of the wind.
For about 15 minutes we watched and listened, awed by the intensity of the storm.
Gradually the boisterous rumble of the wind began to diminish til only the sound of lashing rain remained.
When I called Shelby from the front steps she scrambled over the south retaining wall, slid through the rose hedge and flung herself, drenched, through the door.
I snatched an old towel and followed her into my bedroom, only to find I had left the west window raised about 6 inches and the floor was wet. I spread the towel over the puddle and when Shelby, wide-eyed crept onto it I was able to blot some of the wet from her fur.
She remained huddled on the damp towel for the next hour, evidently traumatized by her experience of the storm. 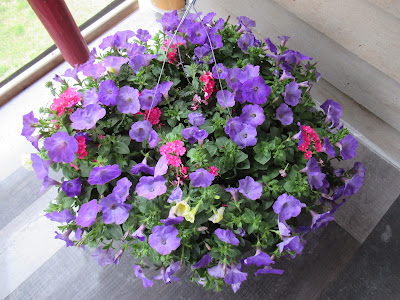 This beautiful planter came home with Jim from one of his Wednesday errands.
A chilly night is forecast for Saturday, so I won't put the plant on the ceiling hook until the weather settles. Meanwhile it graces the screened porch with joyful colors. 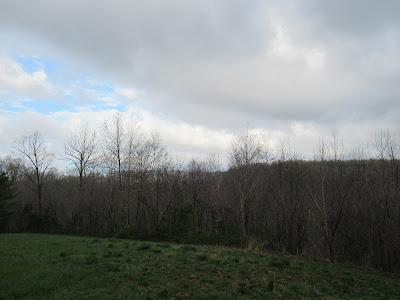 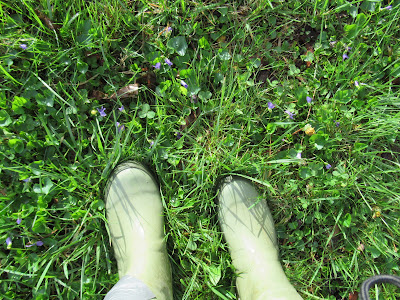 I went out in my tall wellies striding through wet grass and a carpet of wild purple violets. 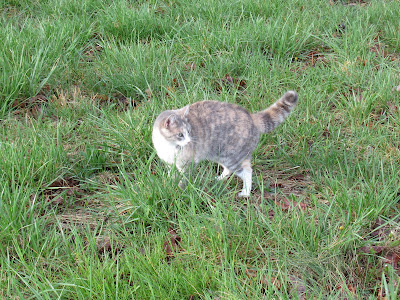 Shelby decided to walk with me. She skitters off then dances back, tail inflated. 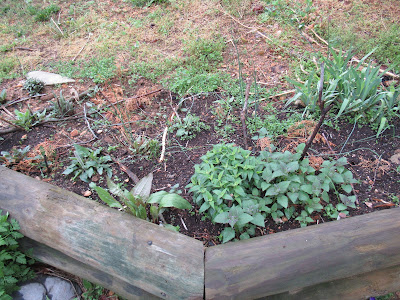 The coneflowers moved to the west raised bed several weeks ago have settled in.
I can remove the sticks laid around to protect the area from cat explorations. 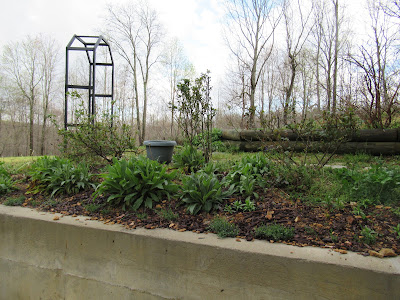 Foxglove, pinks, emerging lilies and the David Austin roses, cool and damp in the aftermath of rain. 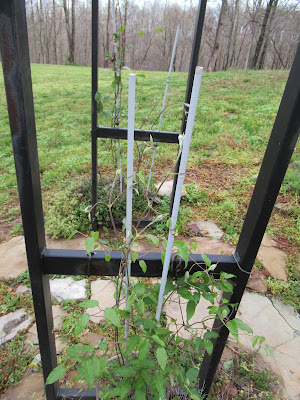 The newest clematis, planted last spring are in need of tying in.
Ideally, they need a small trellis of finer grid set against the sturdy permanent trellis. 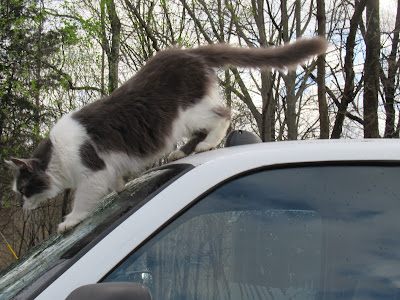 Nellie, having gotten feet and belly wet in the meadow grass decided to perch on the roof of J's truck where the morning sun could warm his bones. His sliding exit leaves muddy pawmarks on the windshield. 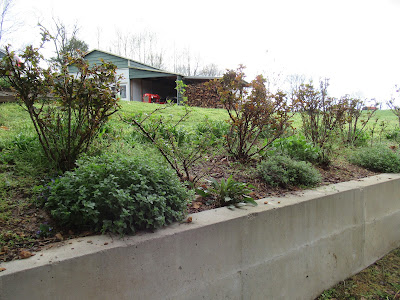 Three hours spent this afternoon weeding on the south wall garden and still more to be done.
The removal of weeds disclosed more self-sown coneflowers, some of which have been moved up to the raised bed by the door.
Taking a sort of inventory of plants started from seed last spring and wintered in pots I've decided to set them in groups to hopefully grow where other plants [the lavender] didn't flourish.
I have several varieties of late summer asters and  blue prairie sage.
These might be considered roadside or pasture/prairie plants; since they are hardy and inclined to spread, I'm hoping they will compensate for the fact that fussy gardening on my knees is no longer an option. 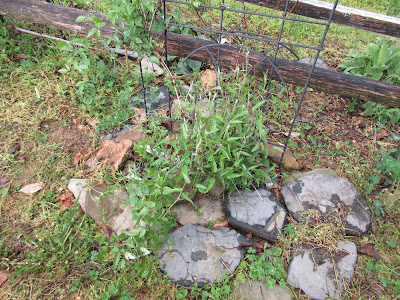 Clearing the mat-forming weeds from the clematis along the wonky fence. More tying in needed. 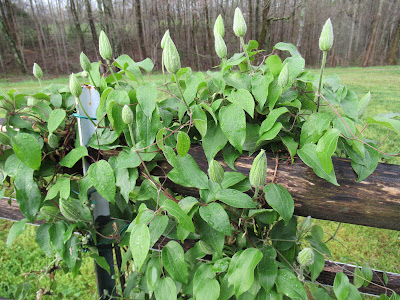 'Candida' has survived frost, snow, cold rains, and being smothered in an old sheet during the coldest nights. She is my favorite clematis, moved from our first Kentucky property to the Amish farmhouse, then spending a year in a huge tub before setting into the ground here. 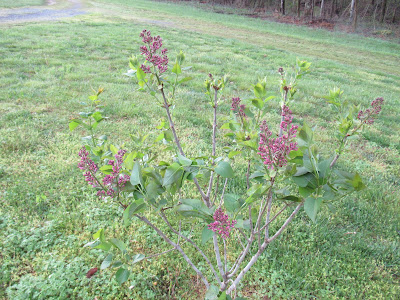 Lilacs!
Howard and Dawn had two delivered from a Tennessee nursery as tiny plants while we were still in the upheaval of construction, spring of 2019.
Now in their third year, both shrubs are ready to flower.
Lilacs are particularly dear to New Englanders--surviving harsh winters to bloom in May. 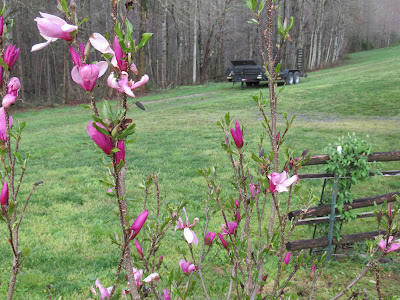 The frost-ravaged 'Jane' magnolias are valiantly striving to put out fresh leaves and a few
somewhat tattered blooms.
The first hummingbird arrived yesterday before the storm; this morning he found the magnolias an attractive place to perch before discovering the feeder of syrup hung in its accustomed place on the south/east porch.
He may have been flustered by the newly red-painted trim on the front porch; as I stood there he darted toward the railings and hovered briefly inches from my face.
The temperature stayed shy of 70 F but with the blue sky, bright sunshine and little wind it was a nearly perfect day to work outside.
Dawn stopped by on her way home with two potted ranunculus--a love gift--I've never had them before and have been researching their care. Tomorrow I will give them bigger pots and set them on the screened porch where I can admire them and move them into the sunroom if a chilly night threatens.
It has been a satisfying day, one that finally felt like spring. Plants leaping from hibernation into exuberant growth; laundry flapping dry on the back porch lines; birds busy around me as I dug and weeded.
Showered and with garden dirt scraped from under my nails, the kittens, Rosie and Elmo, and I sat on the porch while I consumed a Gala apple and a stack of crackers with cream cheese spread.
The hummingbird darted in to sip at the feeder and we enjoyed his company--the kittens [now nearly CATS] intrigued but a bit wary of this new-to-them presence.
The nearly full moon drifted pale in the late afternoon sky and now sheds its glow over the darkened dooryard.
I love the nights of the waxing gibbous moon--I leave the bedroom curtains parted so that its glow will fall on my pillow in the wee hours of the morning.
A long day, and my old bones protesting a bit from my gardening labors, but a day of delighting in the reassurance that spring always does arrive.