Packed with delicious fillings, this is not your ordinary ham sandwich recipe. I typically pile the fillings on a long French baguette and then slice it into small finger sandwiches. However you make this, it wont last long. 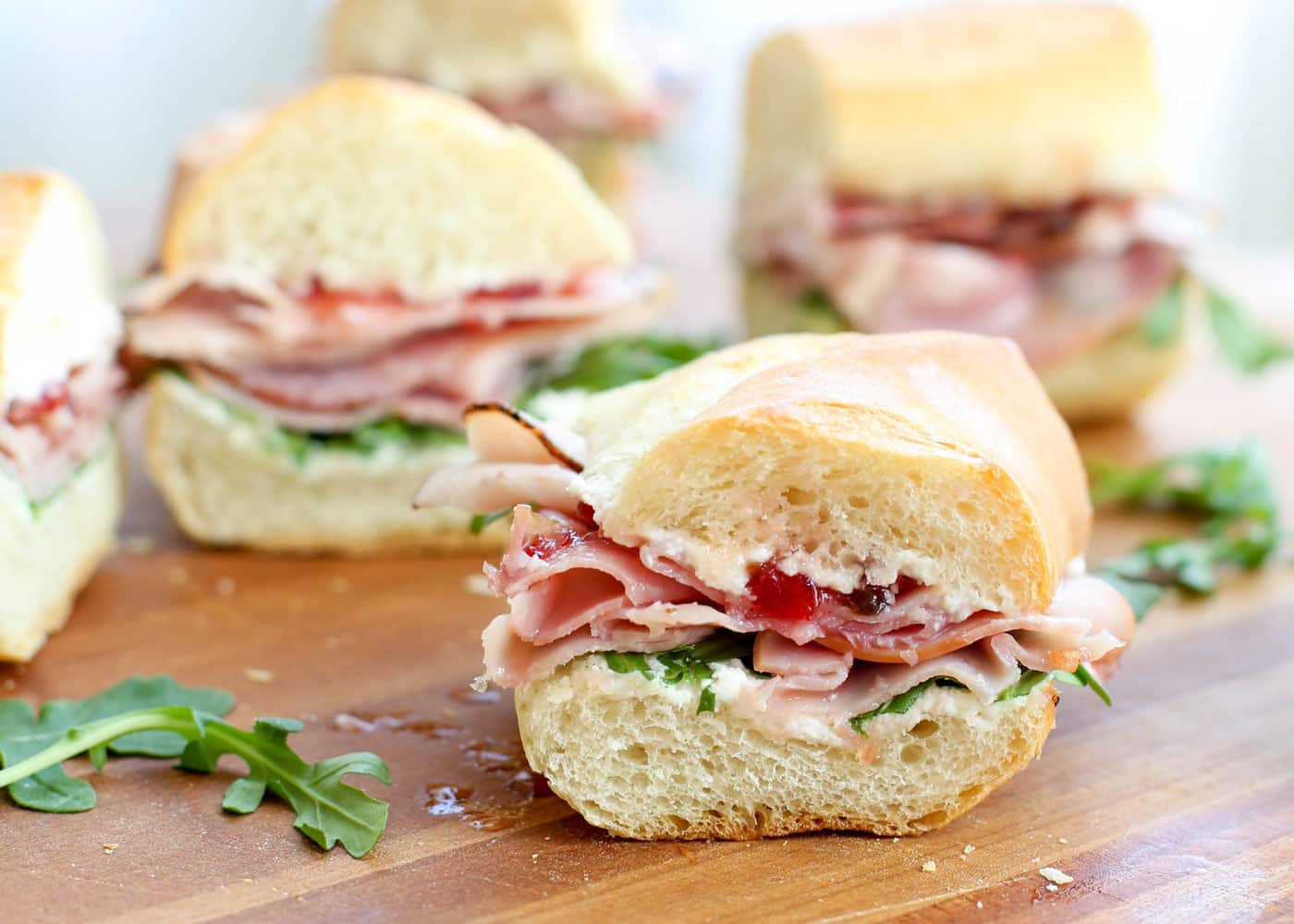 This post was originally sponsored by The National Pork Board and this sandwich was inspired by my trip to SiouxFalls, South Dakota a few years ago.

Weve made this amazing sandwich so many times over the past couple of years, I wanted to share it again, to make sure youll have the recipe fresh in your memory and at your fingertips when you have leftover ham in the house after Thanksgiving and Christmas this year.

On our last morning in Sioux Falls, Chef Neel built a similar sandwich while we were cooking up all the different pork recipes. He called this the best ever ham sandwich. While I knew it would be good, Im reluctant to ever label anything the best of its kind. 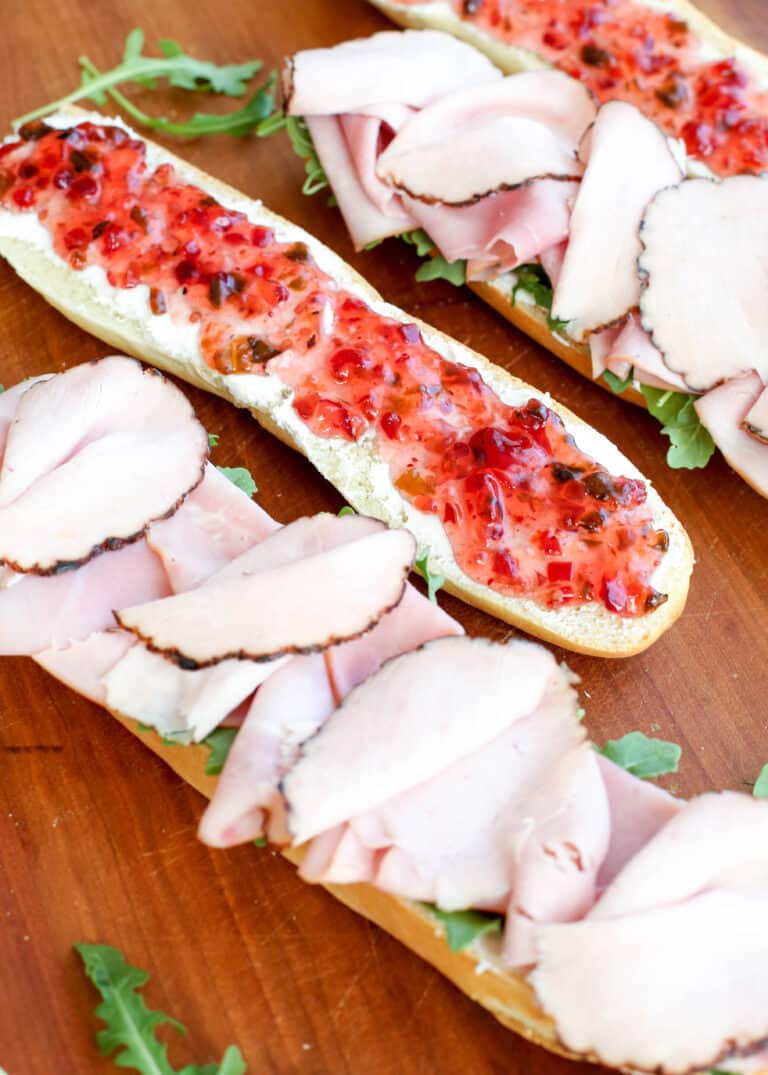 I took one bite and was sold. This was, indeed, the cream of the crop of deli ham sandwiches. The creamy goat cheese and savory ham were a perfect combination. A spoonful of spicy pepper jam took the whole thing to sigh-worthy heights.

I knew right away Id be making my own Best Ever Ham Sandwich after I returned home again. The recipe Im sharing with you today is one youre going to want to make over and over again.

How to Make the Best Ham Sandwich

To make this ham sandwich, I followed Chef Neels lead and started with a fresh French baguette. I picked mine up from the bakery section at my local grocery store, but Im sure a homemade baguette would taste fabulous as well. 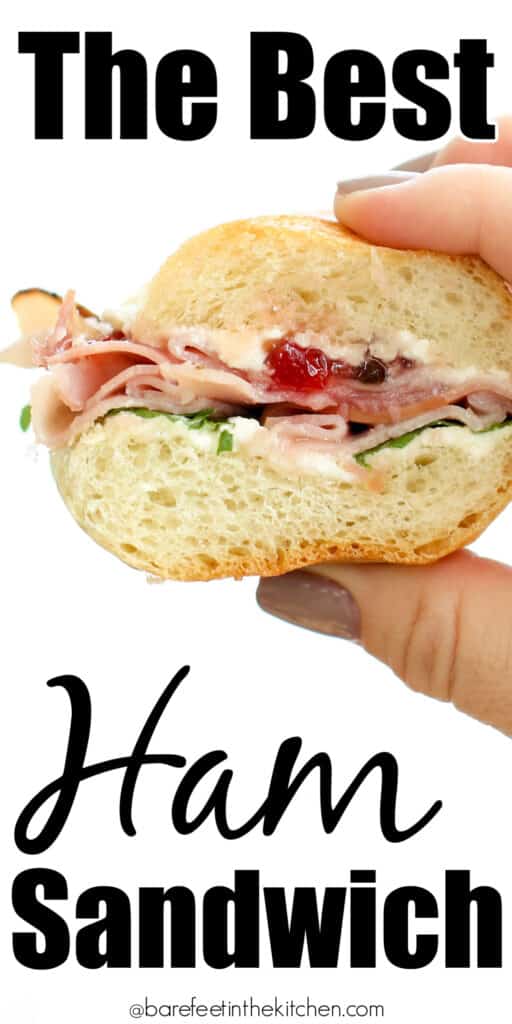 After slicing the loaf in half lengthways, I spread each side with a thick layer of whipped goat cheese. Arugula and thin slices of deli ham are piled on next. The best ham sandwich is made complete with a dollop of hot pepper jelly spooned on top.

One baguettes worth of sandwich can be sliced into sections to feed four people for a lunch.This is also the perfect party sandwich.Slice it into eight sections to serve as an appetizer!

My family can never get enough party foods and snack ideas, so this sandwich is perfect for us. Ive made it twice now and my kids are already asking for the fancy Ham Sandwich again.

You can make this on classic French bread, on a baguette, on hoagie rolls, on toast, on whole grain wheat bread, the possibilities are endless here. You can make the sandwich as hearty or as light as you like simply by adjusting the amounts of each ingredient. 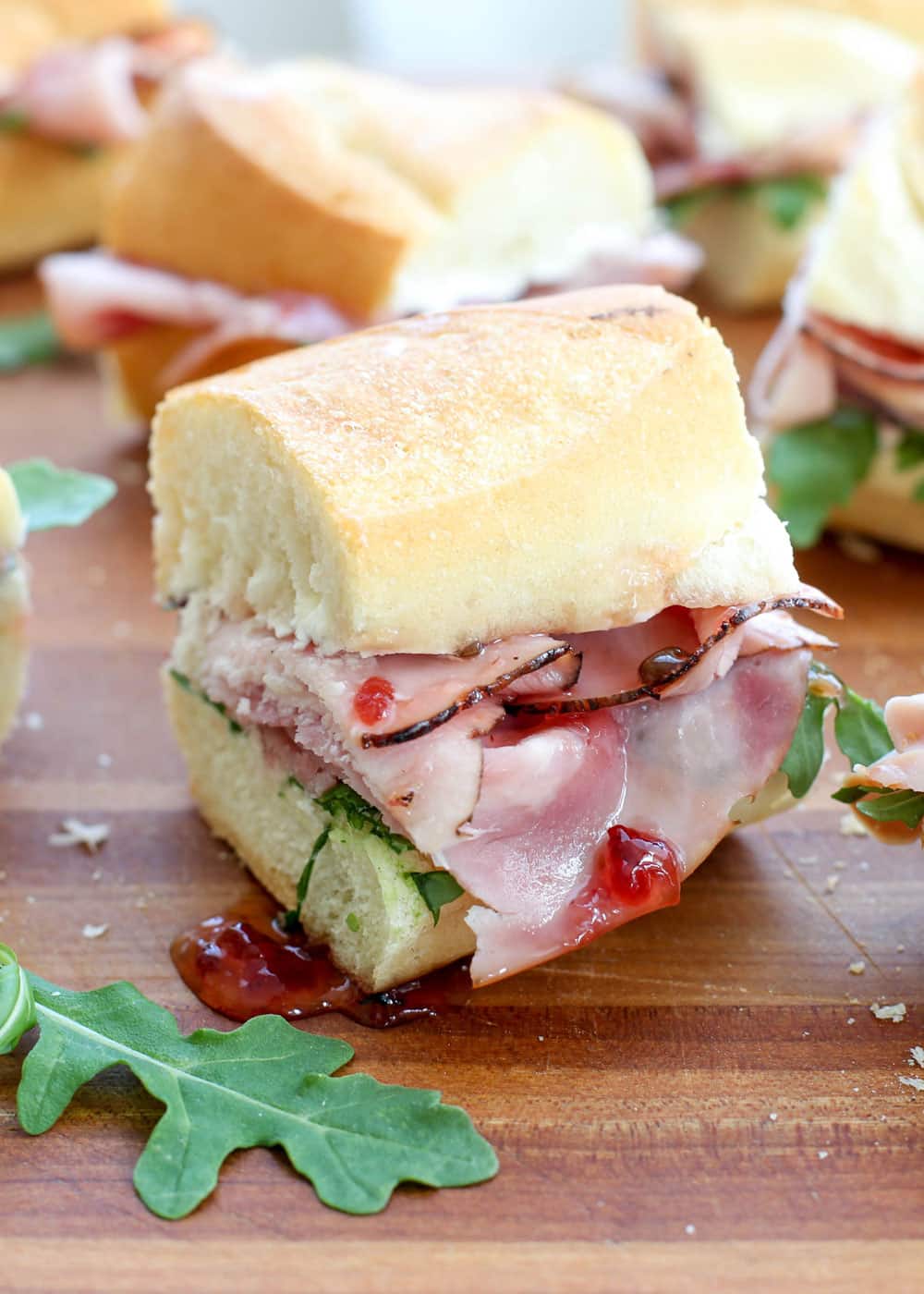 When Im making these sandwiches for a quick dinner, I pile them high with plenty of ham slices. As an appetizer or party snack, Ill be a little lighter on the meat. I love how adaptable this recipe is for any occasion.

Be warned that you just might sigh when you bite into this sweet and savory sandwich. If youre a ham lover (or even if youre not!) this sandwich deserves the name The Best Ham Sandwich Youll Ever Eat!

I almost cant believe Im this excited about a ham sandwichbut I promise you its worth the hype. Right now, I admit Im pretty sold on making these sandwiches just about as often as I can. Ive got to remember to leave room for all the other great party sandwiches we like again!

For more amazing recipes for party sandwiches, I highly recommend both these Chicken Cordon Bleu Sliders and these Dill Pickle Chicken Salad Croissant Sandwiches. Ive also got this Cajun Cheesecake Sandwich recipe on my list of party sandwiches to try next! 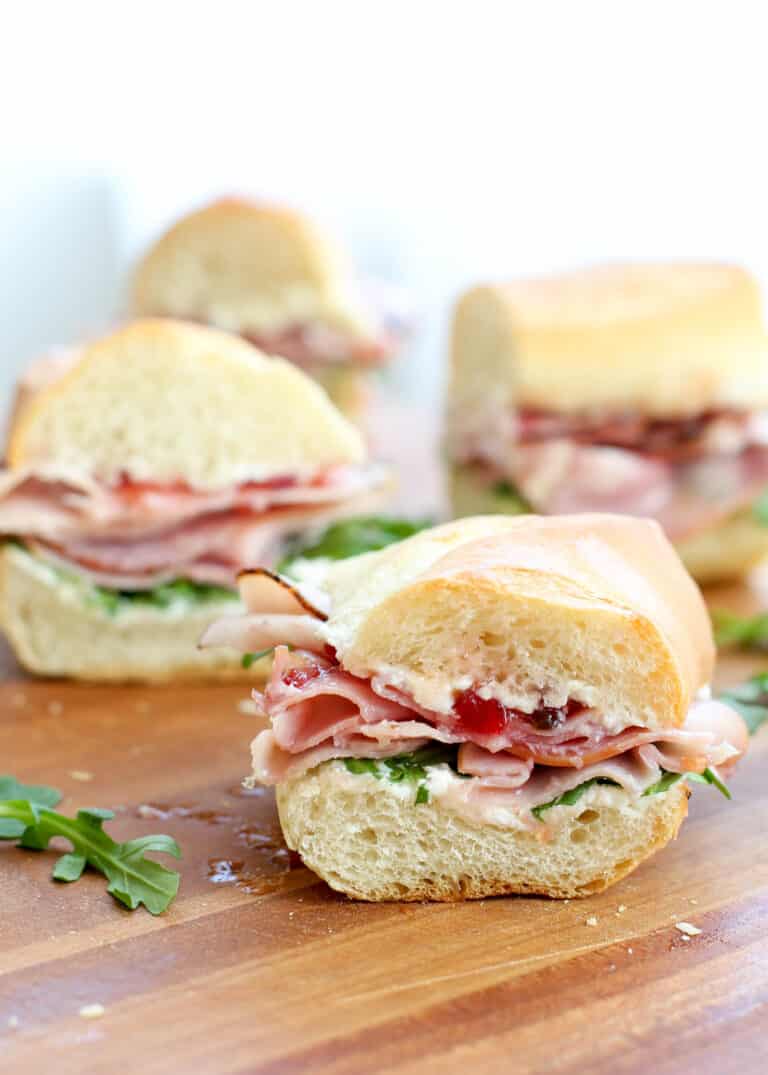 I have a well-known love for ham and you can see that evidenced all over this website. Check out all of these ham filled recipes!Better Than Take-Out Ham Fried Rice is a kid-friendly favorite thats easier and faster than take out. Theres nothing else like Ham Balls served on their own or in a Sweet and Sour Ham Ball Stir Fry. (Skeptical? I promise that once you try the ham ball stir-fry, youll be a fan too!)

Ham and Cheese Waffles (grab and go or drizzle with syrup at the table) and Ham and Vegetable Pasta Skillet are frequently requested by my kids. Since I started making Balsamic Dijon Glazed Ham, I havent made another baked ham in over five years. Ham and Cheese Biscuits and Slow Cooker Potato Ham Chowder never disappoint either.

Kitchen Tip: I use this cutting board and this knife to make this recipe.

Creamy goat cheese and spicy pepper jam make this the best ham sandwich recipe youve ever tasted. As a party food or an easy lunch or dinner, this sandwich is always a hit. 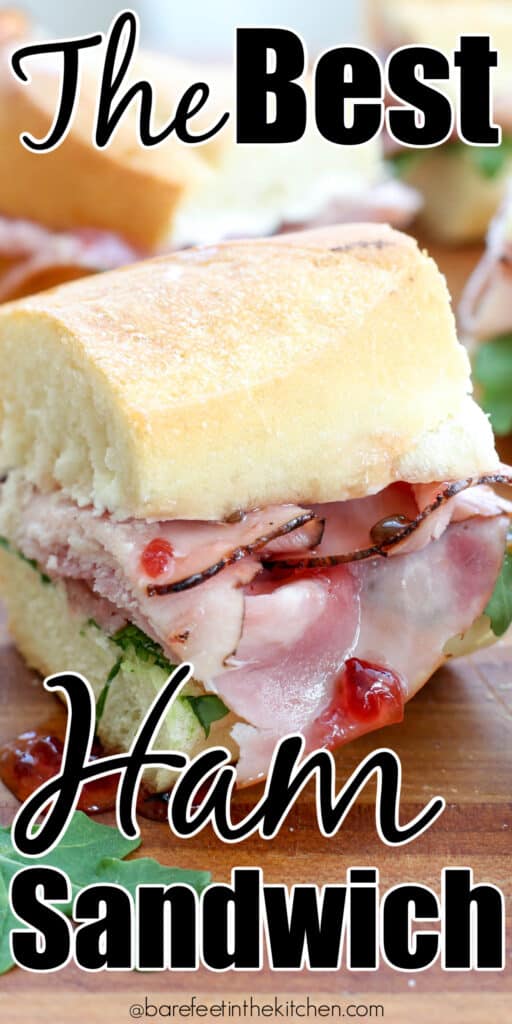 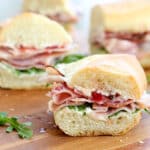 My favorite way to make this sandwich is with Cranberry Pepper Jam. If you are able to find it in the store, buy it. However, if you have about 15 minutes, you can make your own!

Disclosure:Ive partnered with the National Pork Board to share this recipe with you. As always, all thoughts and opinions are my own.

The post The Best Ham Sandwich Youll Ever Eat appeared first on barefeetinthekitchen.com.