I washed almost all of the windows today.  I skipped half of the patio door and the living room windows because I wasn't in the mood to get the stepstool out of the garage and haul it into the house and out onto the patio.  I'll catch them another day.  I use newspaper to wash them because it doesn't leave lint like paper towels do.  Durwood taught me that.  It does turn my fingers black, but that washes off easily so it's no big deal 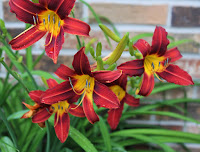 The red daylilies are blooming like crazy.  I wish the flowers each lasted longer than a day though. The yellow Asiatic lilies are still blooming a week later and the red DAYlilies give up after only one day.  I guess that's how they got their name. 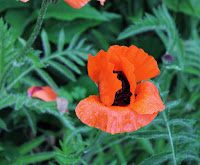 I found another poppy blooming this morning.  I looked around and didn't find any more fuzzy little buds so I guess this one really is the last. 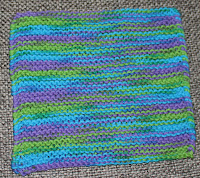 I finished the jelly bean (that's the color name) washcloth this afternoon after the windows were washed.  I like the colors but not as much as the sunset (red/orange/purple) of the other color of Dishie yarn I used before.


Today's toss was the second, older food dehydrator.  One of my knitting pals emailed that she's interested in one of them so I got yesterday's toss out of the car (it's newer and cooler and a name brand) for her.  I'd rather give it to a friend who'll use it than dump it at Goodwill.  Anybody local interested in a pasta maker?  You know, one of those machines you clamp onto the table and crank to make noodles.  Durwood had one, with a motor attachment, that I will never use.  It'll be tomorrow's toss.

23 June--Barbara Malcolm, Tropical Obsession.
Being good citizens took up the rest of the day for Sam and Maxi.  They told their story over and over to each and every policeman who arrived.  Not familiar with the ranks of police in Bonaire, Sam never knew if the latest questioner was of a higher rank than the last or not.  He tried to give the third one, or maybe it was the fourth one, their address at the bungalow so they could leave.
“I do not think that would be a good idea,” the policeman said, squinting at him as if measuring him for handcuffs.
Sam had reached the end of his patience and began yelling.  “Where do you think we are going to go on an island this small?  We have paid our rent for the entire month and are probably going to stay for another one.  We are not leaving.”
The policeman pressed a hand on Sam’s shoulder trying to make him sit down again and behave but Sam was having none of it.  He dug in his heels and stayed on his feet.  “You think we killed that poor guy, don’t you?”
This policeman had been the first one not satisfied with Sam and Maxi’s story.  He had questioned their statements over and over, had run at them from every verbal direction, and had even separated them to grill each of them hoping, Sam suspected, that he would get the weak link of the pair to crack.  He had insisted that they accompany him back to Thousand Steps driving them in his official car, the wrong way on the one-way road, by the way, with one of his underlings following in their rental pickup truck.  He made them stand and watch the paramedics hoist the body up all those steps and when they reached the top, he stopped the paramedics, unzipped the end of the body bag and asked Sam and Maxi if they knew the man.  It was horrible.  Predators had not hesitated to take advantage of the food source and while Sam and Maxi stood staring shocked at the skeletal face a crab scuttled out of what hair was left.  That was nearly it for Maxi.  Sam felt her totter and he tightened his arm around her.
“This is enough,” he said.  “We were trying to be good Samaritans by reporting this and you are treating us like criminals.  I am taking my wife back to the bungalow.  If you or any of your superiors wish to speak to us further, we will be happy to speak to you there.”
The policeman looked at his notebook.  “Happy Holiday Homes, the orange bungalow?”
Sam nodded.  “That's right.”  He bent down and whispered in his wife’s ear then they crossed the road to their truck where he carefully helped her into the passenger seat.  Then he got into the driver’s seat, started it up, maneuvered around the various police and rescue vehicles in his way, and drove off.


My friend, Lala, send me a Zoom invitation this morning and we got together to visit and did a prompt.  It was good to see her and good to have a writing friend even if it was just online.  It was almost like being together. We'll do it again.
--Barbara