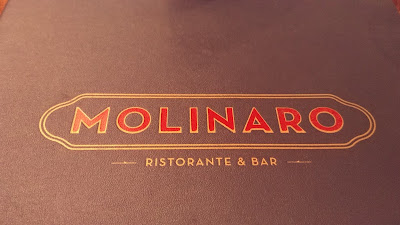 Last weekend we met up with four friends for dinner at Molinaro Ristorante & Bar. We hadn't been there in over a year. Since that visit, the menu has changed but there are still pizza, pasta, and meat/seafood entrees. Here's what we enjoyed: 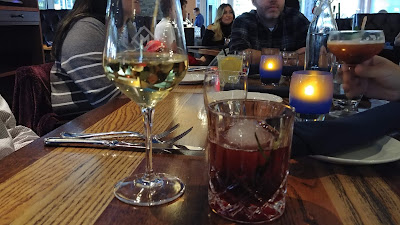 A glass of Verdicchio for me. Cocktail: Immortale for SP (bourbon, smoked rosemary, sherry). There also was a lemon cocktail, a scotch one, and a cucumber/mint one. I didn't take photos of anyone else's drinks/food, just ours. 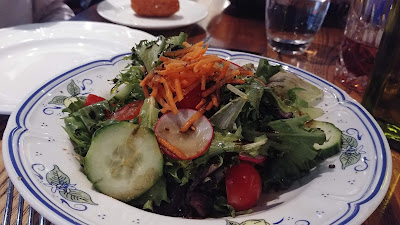 Italian Salad (mixed greens, tomatoes, roasted peppers, vinaigrette). Our server brought balsamic vinegar & olive oil on the side for me to dress my salad since the vinaigrette had garlic in it. This was a tasty salad with tomato, cucumber, radish, carrot, and olives mixed in with the greens. 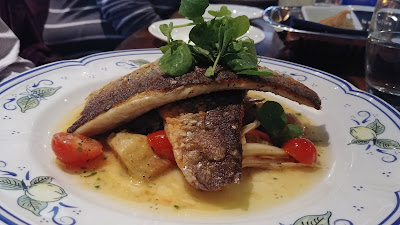 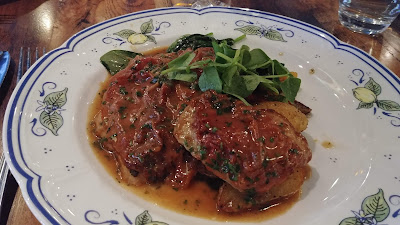 I chose Veal Saltimbocca (prosciutto, sage, wine, sautéed spinach, roasted potatoes). This was good. I really liked the sauce. I thought it was a good amount of veal and expected that I'd have leftovers but then I ate all the veal & most of the potatoes, so no special leftovers Sunday lunch for me.

Our dining companions ordered:
Everyone said their meals were tasty. 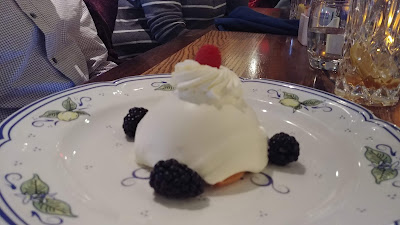 Dessert: Delizia al Limone (sponge cake filled with fresh lemon pastry cream, limoncello and
whipped cream). It had a very light lemon flavor and was tasty though I had expected more lemon cream. We were the only ones to order dessert.
I like Molinaro but somehow I don't love it. I'm not sure why. I know that last time, we thought it was a bit expensive for what we had. This time, we spent less, but we also ordered a bit less. The servers now dress a bit more casually but are still friendly and attentive. The one thing that was an issue for me was that plates were cleared as a person finished, not cleared all at once after the last person finished. Since I am always the last to finish, this is a pet peeve of mine at restaurants because it makes me feel really self conscious and also because I was taught to not clear plates until everyone is done eating. I did a search and apparently, this is becoming more of a trend/accepted practice, but I'm old enough and traditional enough to not be on board with clearing plates before everyone is finished. Just like you shouldn't start eating until everyone has their food.
We will be back. I'd still like to go when the weather is warm and we can sit outside.
Previous Visit:
September 2018

Creamy Tomato and Spinach Sauce for Gnocchi or Pasta
February 04, 2023

107 Times People Made Delicious And Creative Snacks For Valentine’s Day And Were Kind Enough To Share Their Ideas Online
February 04, 2023