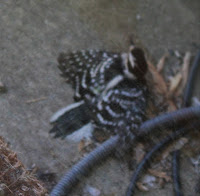 That's what I imagine it sounded like when the little Downy Woodpecker taking a rest on the patio this morning crashed into the patio door while I was out watering the tree.  I didn't open the door because I didn't want to startle her so the picture is blurry but I'm happy to report that she made a full recovery and had flown away within a few minutes.  Whew.

I cast on and knitted the first section of preemie hat in preparation for having to sit and wait for my car to be repaired but then I decided to come home instead of sitting in the waiting area.  Naturally I left my knitting bag in the car so I had to do random chores instead of knitting.


My knitting friend, CS, stopped over on her way to a call and picked up the food dehydrator for herself and the pasta machine, motor, and ravioli maker for her son and his fiance.  I was so glad that the stuff went to a friend who was glad to have it.  Much better than dumping it at Goodwill.  Today's toss was two grocery bags of plastic drinking bottles and sippy cups that have outlived their usefulness.  I'm not sure what's going tomorrow.  Probably a baggie of old silverware that emerged today. 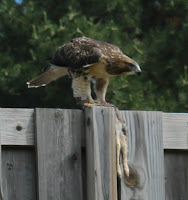 This hawk photo is from yesterday.  I heard it today and saw it flying around but didn't see it on the fence or the trellis.

Late this afternoon while waiting for a Zoom knitting guild board meeting to commence I cast on and knitted a couple repeats of Stuck-at-Home Warshrag #5.  I like the muted gray-green of the yarn of the bricks.

25 June--Barbara Malcolm, Tropical Obsession.
Detective Inspector Joachim Rooibos was tired already and it was not much past noon.  He had gotten to the site where the Americans had found the body floating in the sea only to find that his assistant, Sergeant Hale, had allowed them to return to their bungalow.
“I need them here, Hale,” he had said through gritted teeth.
“Yes, sir,” Hale had said, looking at the toes of his shoes.  “I spoke with them.  I asked them a few questions.  Then I had them look upon the corpse to see if they knew the man, if the sight of him fresh from the ocean jogged them into confessing.”
Rooibos sighed.  Hale meant well.  He was eager, almost too eager, and he worked hard.  He watched too much American television, imagined himself a hard-boiled type who growled at suspects and swaggered at crime scenes.  Hale was young and had not worked too many deaths.  Rooibos could see that under the bravado Hale was nearly sick, under the firm jaw the muscles quivered.
“You interrogated them, didn’t you, Hale?  You bulldogged those nice people until the husband got angry and took his wife home.”  The last was not a question.
Miserable, Hale nodded.
Detective Inspector Rooibos saw the smiles on the faces of the patrolmen loitering on the opposite side of the road.  Rooibos decided to give Hale a break.  “Did Sergeant Hale direct you to look for where the body may have fallen from, Officer Royal?”
The smile melted off the face of the young Officer Royal who squared his shoulders and turned to examine the state of the gravel along the road and check for scratches in the limestone wall leading to the dive site.  Rooibos motioned Hale to follow him into the shade.
“I am not angry, Connor, but I am disappointed.  We have discussed the proper way to extract information from witnesses, have we not?”
Hale nodded, his eyes downcast.
“Look at me, Connor.”  The younger taller officer raised his eyes.  “I am calling you by your given name, not your official title.  This should tell you that I am teaching you, only chastising you a little.”
Sergeant Hale opened his mouth, but Rooibos forestalled him, saying, “You are about to excuse yourself by telling me that the other Detective Inspector with whom you work uses intimidation to good effect and you wanted to try it out.  Correct?”
“Yes, sir.”
“Tell me, what sort of people was Detective Inspector Gerharts questioning?”
Hale dug the toe of his shoe into the sandy soil as if it helped him think.  “They were young men, sir, who he suspected of breaking into tourist vehicles.”
“Ah, I see, so do you think that perhaps he would speak differently to young toughs than middle-aged tourists?”
Sergeant Hale frowned and nodded unhappily.  “Yes, sir.”
Rooibos was not at all sure that his subordinate understood the point he was trying to make but the longer he stood here trying to mold Connor Hale into a serviceable police officer the longer the person responsible for the death of the man just pulled from the sea had to escape.  If there were such a person.  Rooibos had to consider that it was possible that a man in his middle years and from all appearances of the upper class was taking a walk when he slipped and fell to his death.  Of course, it would be logical if there were a vehicle abandoned at one of the parking areas along the cliff top but there was not.  So how did the man get into the water?  He thought he should set his officers examining the cliff tops between here and, oh say, Oil Slick Leap dive site and, he should send out the police boat and have them examine the cliff face in the same area.  As he made his way back to his official police car, he began to punch numbers on his phone and set things in motion.


I did a lot of waiting today--waiting for my car to be fixed, waiting for CS to stop, waiting for the Zoom meeting to start--and I also went to the grocery where I spent way more money than I anticipated because I needed things like toothpaste, OTC meds, and fabric softener.  I used all of my self-control and didn't buy a pint of ice cream or stop for a cheeseburger on the way home, both things that I was sorely tempted to do.  I'm having 16 dark chocolate M&Ms as a reward.  16 is 2 points.
--Barbara