Boy, I was so eager to photograph this bowl of rich chicken ramen so I could eat it that I did not see the bit of green onion on the spoon handle! Oh well. This braised chicken ramen in super stock recipe came from an unusual source the Dynamite Chicken cookbook by Tyler Kord. The books subtitle conveys plenty of swagger but Kords instructions for prepping chicken are handy for chicken newbies. His recipes are fun and a little irreverent. Theyre not out to be ultra true to any specific cuisine, but they do get you to cook up chicken-y dishes.

I spent a major portion of my youth tinkering with instant ramen, seeing if I could dress it up. For that reason, I was intrigued. Additionally, this recipe was easy and used readily available ingredients. I shopped for the noodles and bought canned chicken broth at Target, for instance. The rest of the ingredients came from my pantry or freezer, in the case of the chicken leg and bacon. I even foraged in my garden. Kords combination of ingredients caught my eye too.

Whats up with the Bacon and Potato?

The recipe calls for bone-in, skin-on thighs but I had whole legs, which I like for textural difference. Theres just one slice of bacon required to get a lovely light smoky fattiness; you dont have resort to finding pig parts for the simple broth.

The potato thickens the broth, so it seems rich, like a mild tonkotsu broth, but without the actual fattiness to weigh you down. I thought the bacon and potato were brilliant and along with a ton of ginger and dried kelp (I use this brand of dashi kombu), the broth turned out fragrant and delicious in little time.

I wanted to test the recipe with the most simple store ingredients, so I chose my go-to broth by Swanson and Maruchan instant ramen. (If youre interested in instant ramen rankings, see this Los Angeles Times article.) The ramen seasoning packet is used to finish the broth. Kord says you dont have to use it, but I did. It has a certain MSG, umami packed flavor.

If you prefer a non-instant ramen option, boil up dried Chinese-style noodles, like ones I used for the Sichuan beef noodle soup. In a pinch, you could use capellini pasta. Instant ramen brands like Maruchan have been fried so they taste rich. There are instant ramen noodles that are unfried so read the labels carefully.

Regardless of noodle type, I boiled the noodles separately to avoid the starches from clouding up the broth too much.

If you dont like the skin, remove it as the recipe says. I like it on the air-chilled chicken that I used so I kept it. Instead of chopping the seaweed, which I left cooking in the broth the entire time, I cut it into skinny pieces so theyd mix well with the noodles.

And from the garden, some old and new arugula. Kords suggestion was great because the spicy green added more oomph than spinach, which is the usual green used. The old stuff was a little tough, so I blanched it before adding to the bowls.

Make ahead tip: You prepare make this recipe and refrigerate the broth separate from the chicken and any toppings. Keep them chilled for up to 3 or 4 days and when your mood strikes, reheat things (microwave the chicken!) to whip up a bowl of tasty ramen. 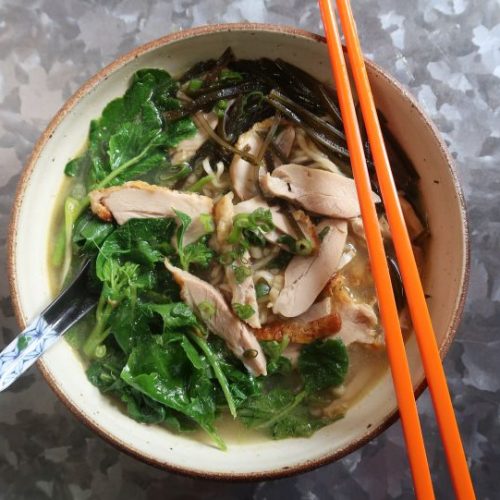 If you double this recipe, use a bigger pot! This recipe has been slightly adapted from the original one in Dynamite Chicken by Tyler Kord (Ten Speed Press, 2019).
Servings 2

For information on ingredients, review the main post. If you use non-instant ramen, boil them separately, drain, flush with water and set aside until you want to add them to the pot of stock. You can also cook the instant ramen separately too to prevent the starch for mucking up the stock. Any vegetable topping may be blanched as well for an elegant bowl.

Best Zucchini Lasagna Recipe (with or without Meat)
July 25, 2021